Read this article at https://www.pugetsystems.com/guides/1637

We will set a DEBUG environment variable for Intel MKL that forces it to use the AVX2 vector unit on AMD CPU’s (this will work for other applications too, like MATLAB for example.) … but please see “BIG Caveat!” at the end of this post.

You may be wondering why this is an issue. In a recent post “AMD Ryzen 3900X vs Intel Xeon 2175W Python numpy – MKL vs OpenBLAS” I showed how to do the first method using OpenBLAS and how bad performance was with AMD when using MKL. I also gave a bit of an history lesson explaining the long running “Optimization” issue between AMD and Intel. The short story is that Intel checks for “Genuine Intel” CPU’s when it’s numerical library MKL starts executing code. If it find an Intel CPU then it will follow an optimal code path for maximum performance on hardware. If it finds and AMD processor is takes a code path that only optimizes to the old (ancient) SSE2 instruction level i.e it doesn’t take advantage of the performance features on AMD and the performance will be several times slower than it “need” to be.

Maybe you’re thinking that it’s not “fair” for Intel to do that, but … Intel has every right to do that! It IS their stuff. They worked hard utilized a lot of resources to develope it. And, there IS some incompatibility at the highest (or lowest) levels of optimization for the hardware. MKL is insanely well optimized for Intel CPU’s … as it should be!

I honestly don’t feel that way! This came up years ago when Intel first started marketing their compilers. I was outraged then and really, I still am. I think I was trying to “justify” it because I couldn’t change it then and I can’t change it now. The only thing I can do now is show people how to get around it! For everyone that takes offense to that paragraph, I understand and I regret saying it. Collectively we should continue the fight against that sort of corporate tactic. –dbk

In the next sections we’ll look at performance results from a simple numpy matrix algebra problem. There will be results from the post that was linked above along with new results using the 24-core AMD Threadripper 3960x.

I seem to remember this from long ago with Opteron?? In any case it has been making the rounds on forums recently as a solution for getting MATLAB to perform better on AMD CPU’s (other use cases too). This should work for any application that is making calls to the MKL runtime library. I believe it is forcing MKL to take the Haswell/Broadwell code path which gives an optimization level that includes AVX2. By default, MKL looks for “Genuine Intel” and if it doesn’t find that it drops to a code path only optimized to SSE2 instruction level i.e. no modern hardware optimizations.

On Linux you would set this environment variable in your working shell or add it to .bashrc

In a Jupyter notebook cell you could use (!),

On Windows 10 you could set this in (Anaconda) Powershell as,

or, you could set it in a Jupyter notebook cell using (!) the same as in Linux.

You can also set this in System in Control Panel (Advanced tab or the Advanced System Settings item), 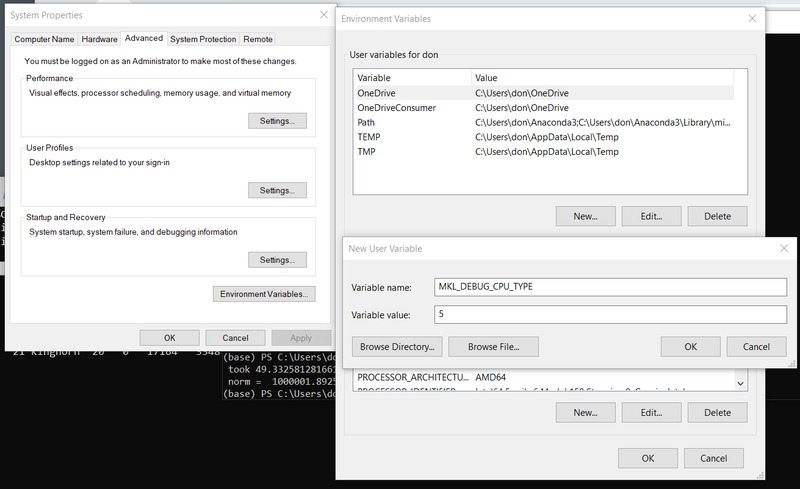 numpy is the most commonly used numerical computing package in Python. The calculation presented in this testing is very simple but computationally intensive. It will take advantage of the BLAS library that gives numpy it’s great performance. In this case we will use Anaconda Python with “envs” setup for numpy linked with Intel MKL (the default) and with OpenBLAS (described in the next section). 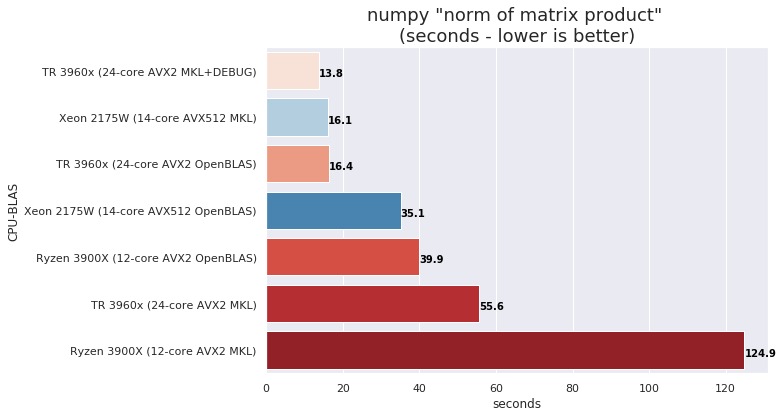 Look at those results and think about it for awhile … The standout features are,

This test clearly shows the effect of hardware specific code optimization. It is also pretty synthetic! In the real world programs are more complicated and are usually not anywhere near fully optimized especially in regards to vectorization that takes advantage of AVX. There are also common numerical libraries that are not so heavily targeted to specific architectures. For example, the popular, and very good, C++ boost library suite.

I have to reiterate, MKL_DEBUG_CPU_TYPE is an undocumented environment variable. That means that Intel can remove it at any time without warning. And, they have every right to do that! It is obviously intended for internal debugging, not for running with better performance on AMD hardware. It is also possible that the resulting code path has some precision loss or other problems on AMD hardware. I have not tested for that!

The best solution for running numerical intensive code on AMD CPU’s is to try working with AMD’s BLIS library if you can. Version 2.0 of BLIS gave very good performance in my recent testing on the new 3rd gen Threadripper. For the numpy testing above it would be great to be able to use the BLIS v2.0 library with Anaconda Python the same way that I used OpenBLAS. Someone just needs to setup the conda package with the proper hooks to set it as default BLAS. I don’t have the time or expertise to do this myself, so, if you can do it then please do! and let me know about it!

Looking for a GPU Accelerated Workstation?

Puget Systems offers a range of workstations that are tailor-made for your unique workflow. Our goal is to provide the most effective and reliable system possible so you can concentrate on your work and not worry about your computer.

Sorting in Japanese – An…