Alienware’s elaborate cooling, which includes two large fans that suck fresh air from below and spit heat out of the rear vents, managed to keep the GPU under 83 degrees Celsius. You have plenty of control over the cooling profiles, so you can rev the fans up for longer play sessions and make them nearly silent when you’re browsing the web. The Area-51M did a great job of managing all of that on its own when I chose the standard profile. As you’d expect, this is a system that’s constantly spewing out warm air, so it might heat up small rooms. That could be a side benefit in the winter, but it’s not ideal for summer months. 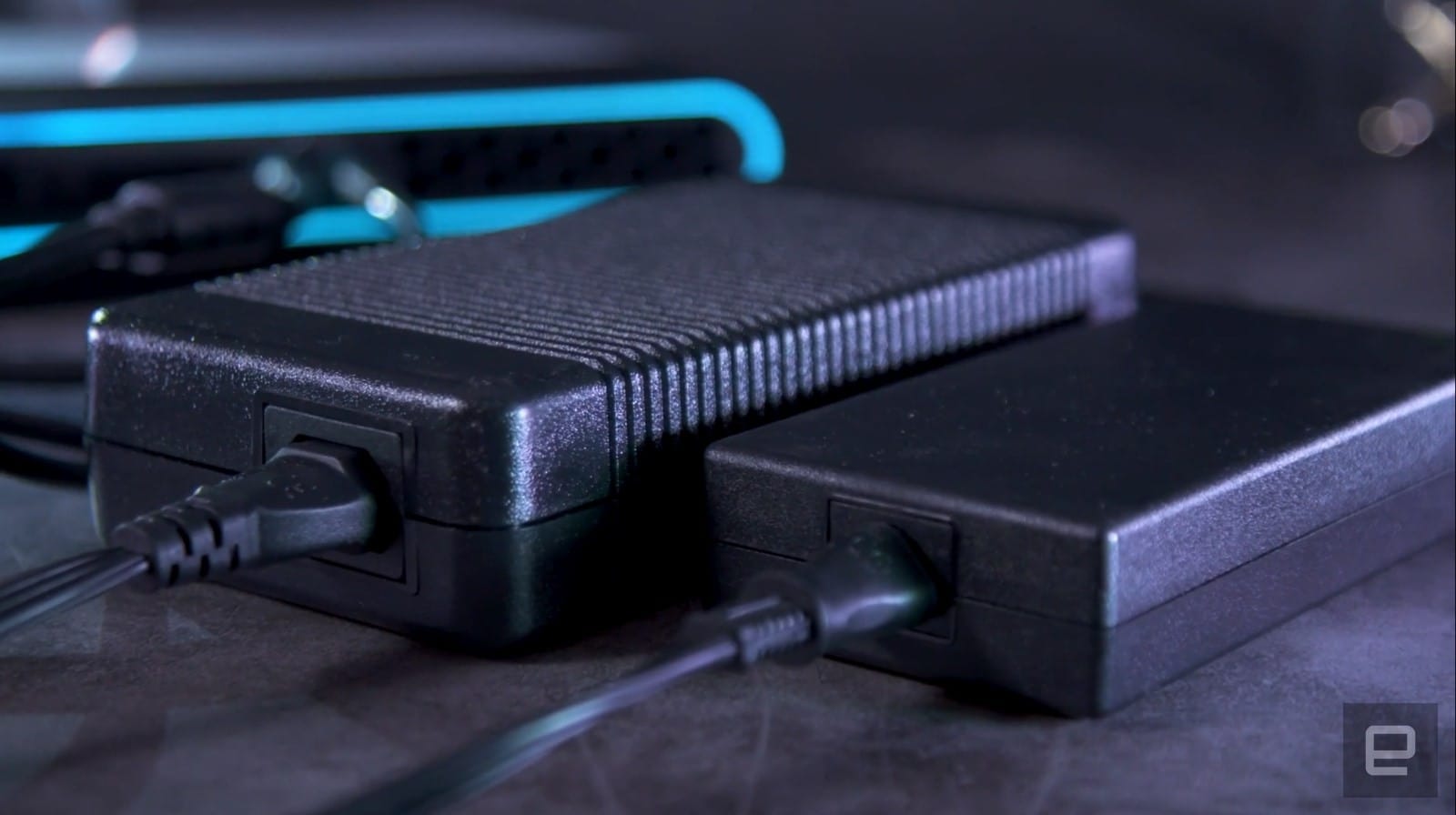 The Area-51M relies on two large power adapters to keep everything running. It’s annoying but unavoidable since AC chargers top out at 330 watts: Having another charger is simply necessary to keep this machine going, especially since it’s relying on desktop parts. When you’re not gaming, a single adapter is enough to power the Area-51M, but you’ll need to have both plugged in once you start taxing the GPU. Alienware isn’t the only company going this route; the ASUS ROG Mothership also relies on two power supplies. It’s simply a physics problem as gaming laptops get more demanding. 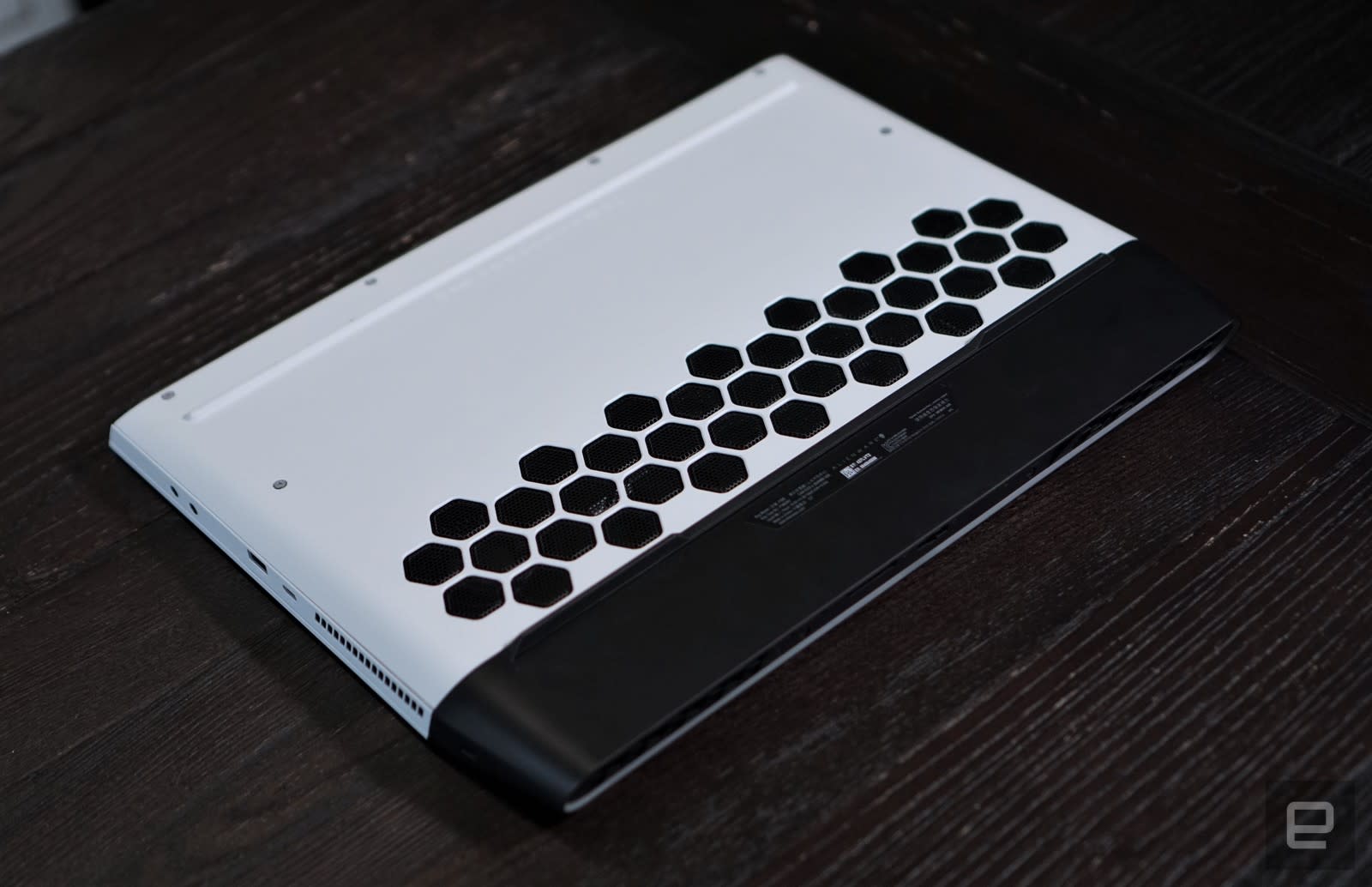 To get to the Area-51M’s internals, you just have to take off six Phillips-head screws on the bottom of the case. That gives you direct access to four RAM slots, the storage disk and battery. But you’ll have to dig even further to reach the CPU and GPU: That involves removing another layer of the case, the rear port hump and the fan assembly and disconnecting plenty of components. It’s not something you’ll want to do often, and you’ll also have to be extra careful about reconnecting everything. If this whole process sounds like a headache, that’s a sign that the Area-51M might not be for you. Even if you’re used to upgrading desktop PC components, dealing with the confined space of a laptop case — no matter if it’s a large one like the Area-51M — is going to be frustrating.

Still, if you can afford it and don’t mind the annoying disassembly process, the Area-51M gives you an unprecedented amount of upgradability in a laptop. If you’re tempted by a new Intel chip in a few years, you can throw that in. And while the GPU rests in a proprietary Alienware module, the company says it’ll have new components coming later this year. There’s no guarantee it’ll keep pace with whatever NVIDIA releases in the near future, though, so you’re making a bit of a gamble there. 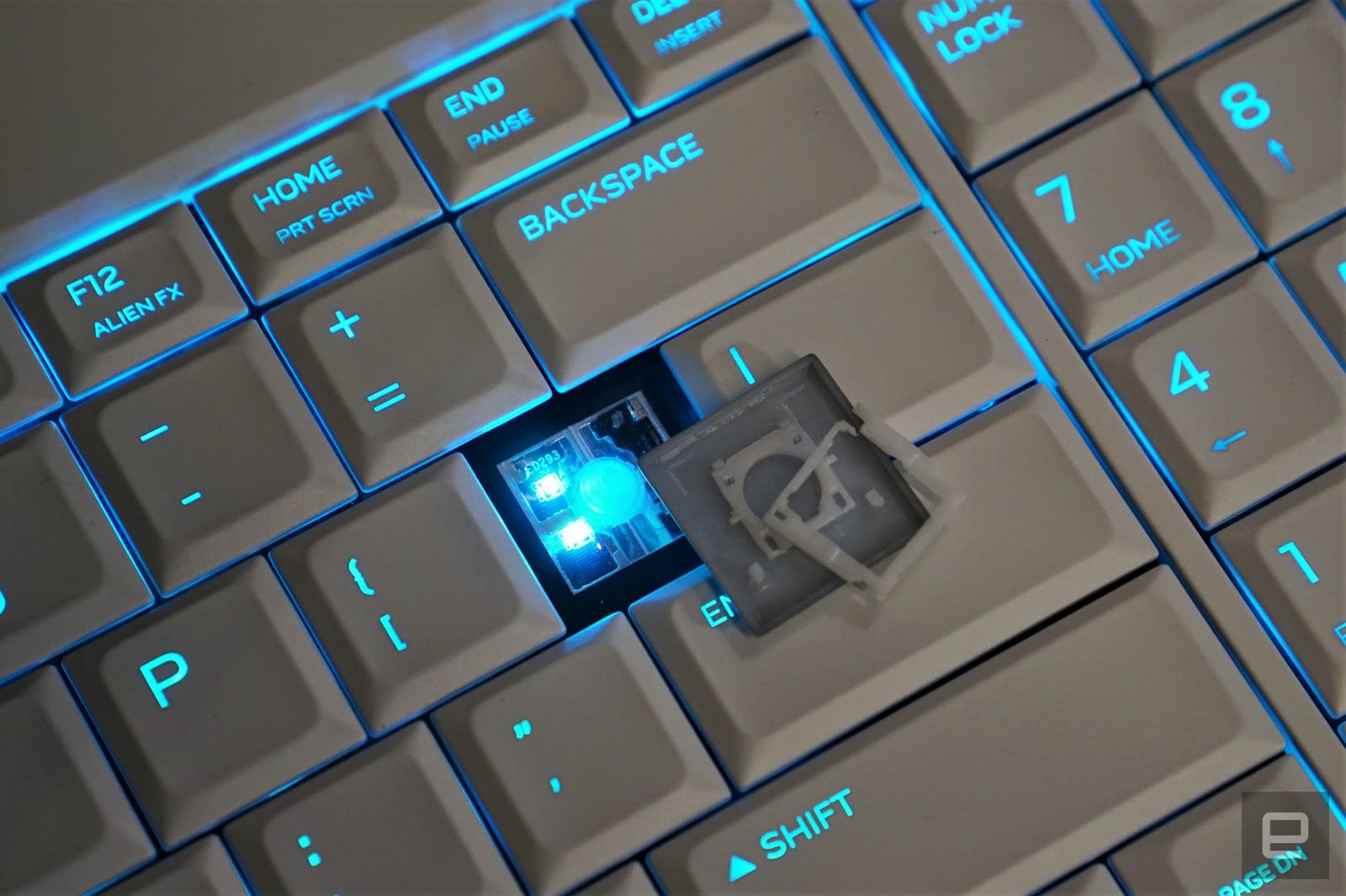 Unfortunately, the components you can’t upgrade on the Area-51M — the keyboard and the trackpad — are the ones that need the most improvement. While the keyboard looks and feels great at first, with RGB LEDs and 2.2mm of travel, it feels a bit flimsy while gaming. I’m also worried about its long-term durability. When we first received the Area-51M, one of the keys flew off within 10 minutes of turning it on. Normally, I’d just snap it back into place, but somehow the plastic spring mechanism underneath was completely shattered. This is the sort of thing Dell would fix under warranty if it happened to you, but it’s still disheartening to see in such an expensive machine. And for the record, it later sent us another unit to test.

The trackpad, meanwhile, feels surprisingly cramped for a modern laptop. We’re used to ultrathin notebooks giving us a ton of space to swipe around, but with the Area-51M, my fingers always felt boxed in. Alienware also opted for an old-school two-button mechanism instead of letting you click into the trackpad. Using it made me feel like I was transported back in time. Of course, gamers will be relying on mice most of the time, but it would have been nice to see Dell show some innovation with its design. Even moving over the trackpad from the slimmer Alienware M15 would have been an improvement.

TAGS: alienware
Share on FacebookShare on TwitterShare on Linkedin

NVIDIA shows how much ray-tracing…

The best apps for buying…

Flirt with Satan, but not…

The Morning After: Amazons illuminated…

What were buying: Googles discontinued…

The Morning After: The ISS…

Huawei is ‘open’ to selling…